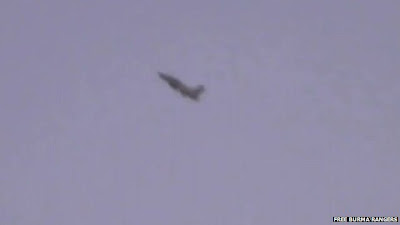 Military aircraft have been targeting rebel areas in Burma's northern Kachin state over the last five days, video obtained by the BBC shows.


The footage, shot by the humanitarian group Free Burma Rangers, shows attack helicopters firing on the ground and jets flying close to the trenches of the rebel Kachin Independence Army.

A government official said the army had not informed them of any air attacks.

Fighting with the Kachin rebels resumed in 2011, after a 17-year truce.

The presence of jets and attack helicopters in recent days was also confirmed by witnesses in the area.

It is not clear how many casualties have been caused by five days of air attacks. Many of the people who live in the conflict areas have already fled into camps, both in Kachin and across the border in China.

Asked to comment on the video, the director of the president's office, Zaw Htay, said the situation was complex, and that the military had told them they were only using planes to re-supply its troops.

"The aircraft being used are K8 training aircraft not fighter jets - that is the information I got from the military," he said.

"I have no information on the use of helicopters. There is a very difficult situation in Kachin state." 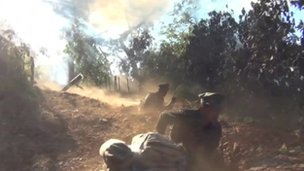 He added that they wanted to hold peace talks with the rebels as soon as possible.

Beyond self-defence
The witness accounts, along with the video footage, suggest that the army is going beyond Thein Sein's public instructions to only fight in self-defence, says the BBC's Jonah Fisher in Bangkok.

At present, it appears that the military could be making preparations for a full-blown offensive on the rebel headquarters of Laiza, our correspondent adds.

The Free Burma Rangers filmed the footage while in rebel trenches.
The group describes itself as "a multi-ethnic humanitarian service movement", according to its website. The group works to provide aid in Burma's troubled border regions.

An estimated 75,000 people have been displaced by fighting in resource-rich Kachin since the conflict re-started in 2011 after the end of a 17-year-old ceasefire between the rebels and the Burmese military.
Despite appeals from the international aid community, the Burmese government has allowed only a handful of convoys to deliver supplies to those sheltering in rebel areas.

Burma has seen a series of dramatic reforms since the nominally civilian government under Thein Sein came to power last year.

But rights groups have also urged caution, pointing to violent unrest through 2012 in parts of the country like western Rakhine state, which has displaced more than a hundred thousand people.